Auto EchoShield in Signia Augmented Xperience (AX) hearing aids addresses the situation where a hearing aid wearer is present in a room with reverberation caused by multiple sound reflections (echoes) from the room surfaces, for example in a church or entrance hall. One cause of the difficulty faced by hearing aid wearers in reverberant environments is that traditional hearing aids can overamplify sound reflections, to the extent that the wearer perceives them as dominating the direct sound. An unintended effect of traditional compression strategies is that higher gain is provided for soft reflected sounds than for louder direct sounds, which can result in sound being perceived as being echoey, blurred, or lacking in clarity. In environments with mild reverberation, it is preferable to preserve the true sound response of the room, using carefully controlled amplification for low-level sounds. In environments with more challenging reverberation however, there is a need to assist the hearing aid wearer by attenuating prominent parts of the reverberation. Thus, processing sound in acoustic environments with different amounts of reverberation had always involved a compromise. Until now – Signia has addressed this compromise very effectively with EchoShield in a dedicated hearing program for reverberant environments. The new Auto EchoShield constantly analyzes the level of reverberation in any situation, and then automatically adjusts the sound processing accordingly, allowing the wearer to focus on what is important without having to worry about their hearing. 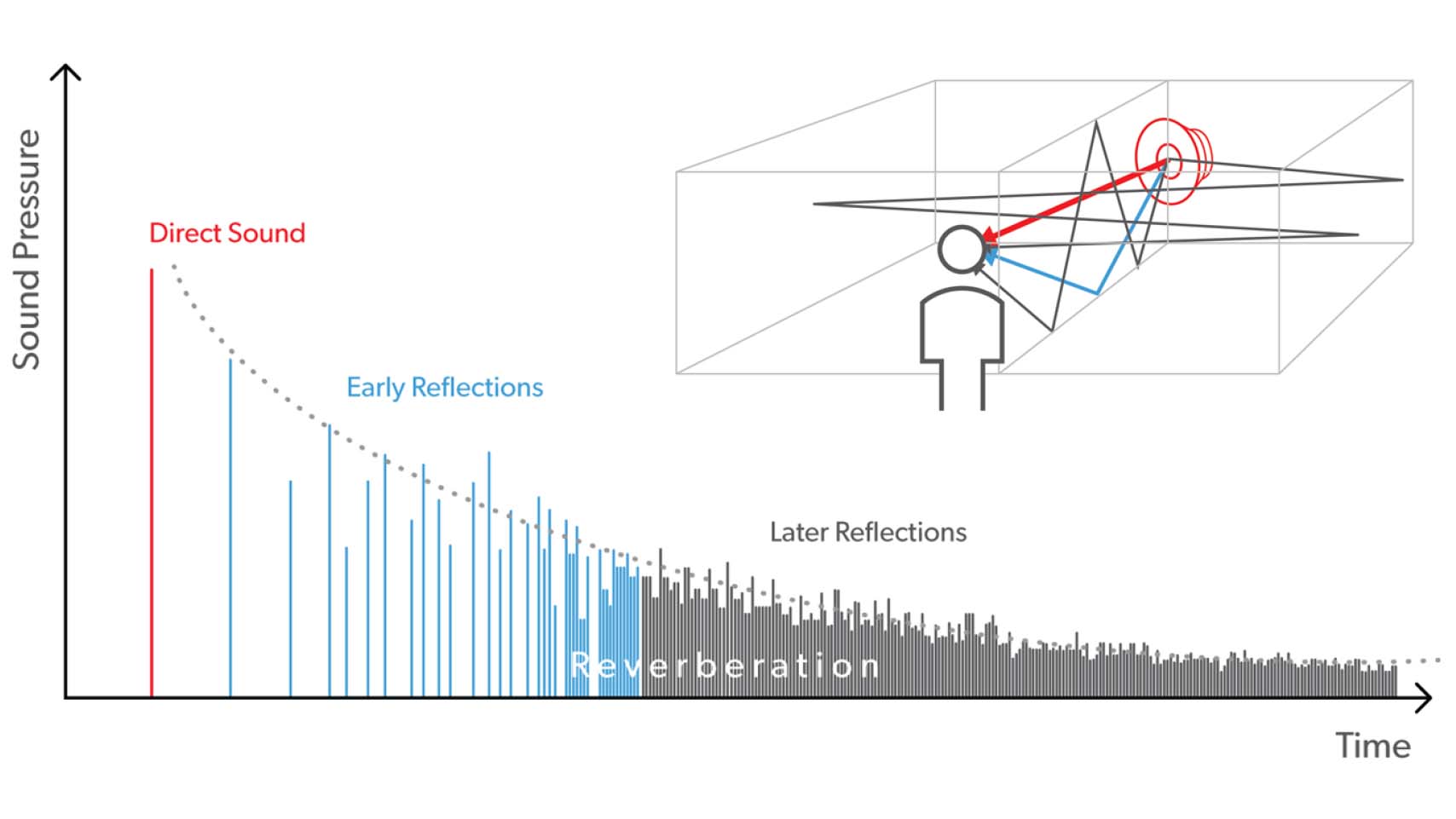 Figure 1. Illustration of direct sound, early reflections and later reflections when an impulse sound is transmitted to a listener in a room with reverberation.

When the sound is speech, the direct sound and early reflections both contribute positively to speech intelligibility at the position of the listener, whereas the later reflections may have a deteriorating effect if they are so loud that they cause temporal and spectral smearing that distorts the speech (e.g. Kuttruff, 2009). The more reverberant the room, for example as measured by the reverberation time (T60), the more dominant the later reflections will be, and the higher the risk that speech intelligibility will be negatively impacted. The problems caused by reverberation are experienced by all listeners, both with and without hearing loss. However, for people wearing hearing aids, the problems may be increased due to the non-linear gain, which typically is provided by modern hearing aids. The fact that gain is higher for lower input means that rather soft late reflections may be overamplified to a degree where they create additional problems for the wearer when listening to speech in reverberation.

To address this issue, Signia AX hearing aids constantly measure room acoustics-related information from the input signal. Auto EchoShield Analysis can accurately differentiate between direct sound, early reflections, and later reflections in any room, within a few seconds. This analysis also provides an estimate of the amount of potentially disturbing later reflections and passes this information to the processing module of Auto EchoShield (see Figure 2). 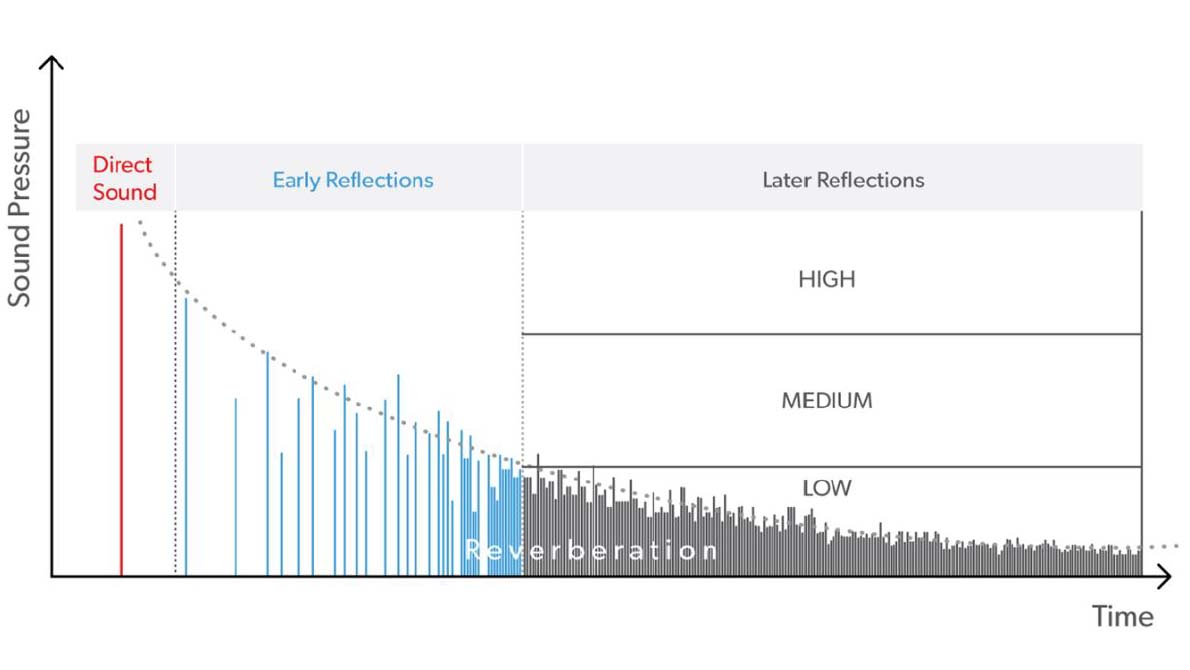 Following this analysis, Auto EchoShield processing then amplifies only the direct sound and early reflections, since these are known to be very important for speech intelligibility in normal-hearing and hard-of-hearing listeners and enhance the soundscape of the room. This is illustrated in Figure 3, which shows the effect of turning Auto EchoShield on in a reverberant room when a short impulse sound is played in the room. The plot shows the acoustic output of the hearing aid as a function of time, with and without Auto EchoShield. It is clearly visible how the early reflections, which are present in the first approximately 50 ms of the signal, are preserved, while the later reflections are substantially reduced by Auto EchoShield. In case of a speech signal, less interference with the following speech cues would happen, allowing improved speech clarity and thereby making it easier to understand what is being said, without losing the impression of the room, which is still provided by the early reflections. 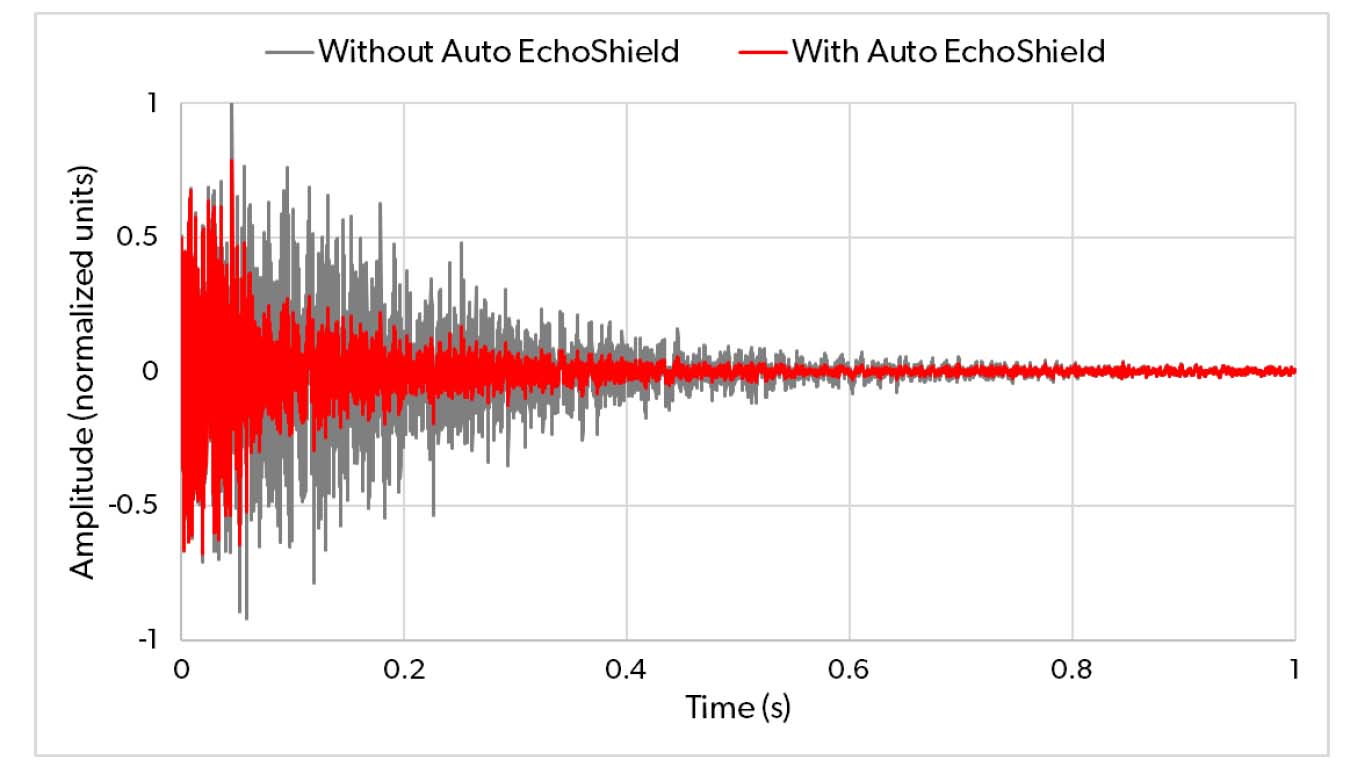 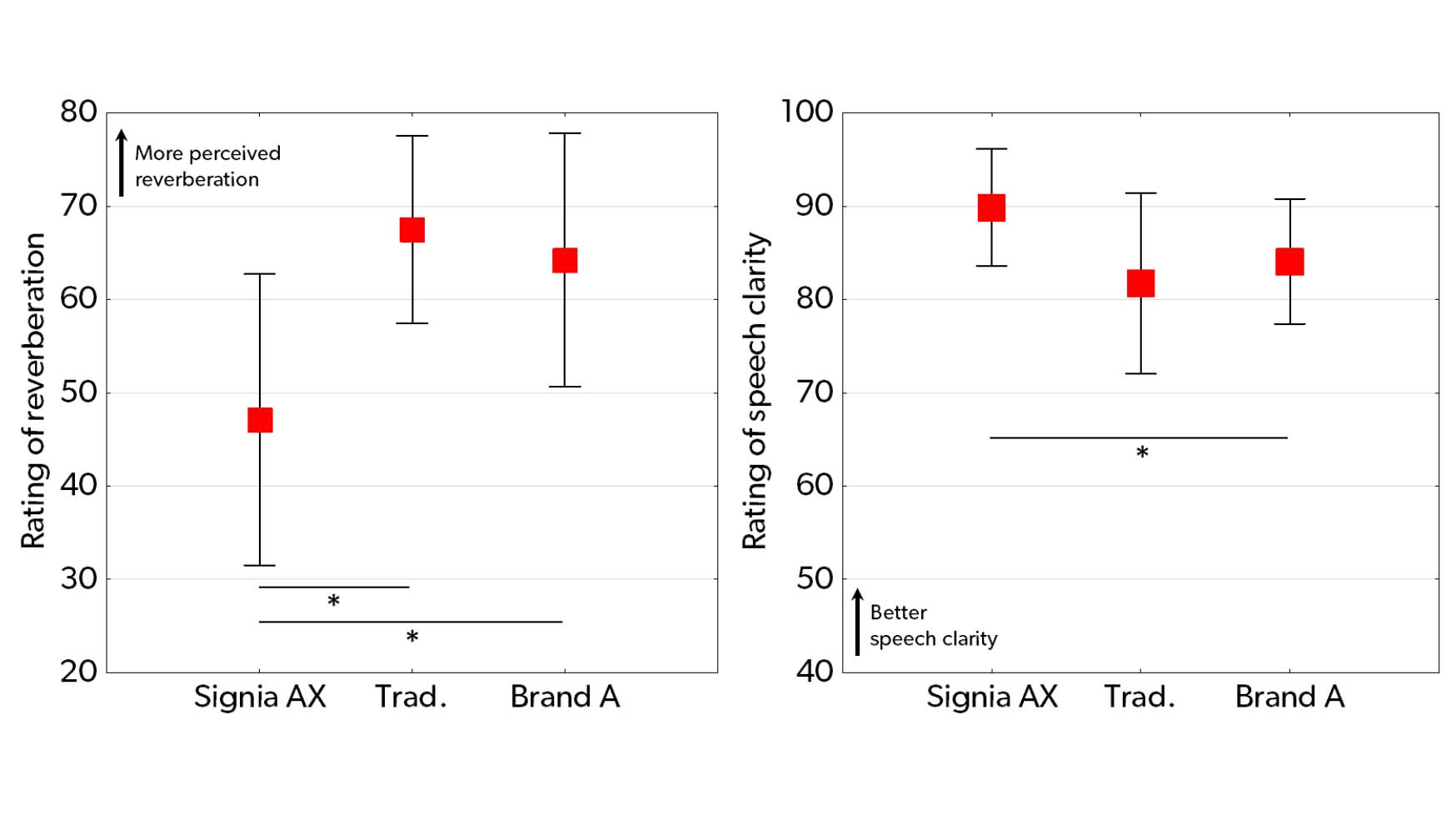 In the same study, 17 of the participants were fitted with Signia AX devices that both included a program with the full AX functionality (thus, including Auto EchoShield) and a second program with the same traditional processing scheme that was used in the lab listening test. In a real-life reverberant scene (an entrance hall), the participants were asked to switch between the two programs and to rate the difference on a scale from -5 (Program A much better) to +5 (Program B much better) for six different perceptual sound attributes. The mean ratings of the sound attributes are plotted in Figure 5, showing a statistically significant benefit of Signia AX with Auto EchoShield in all six domains. Besides confirming the finding from the lab that Auto EchoShield improves speech clarity, the participants also reported improvements in perceived speech intelligibility, listening effort, room perception, listening comfort and overall satisfaction. More details about the study can be found in Jensen et. al (2022). 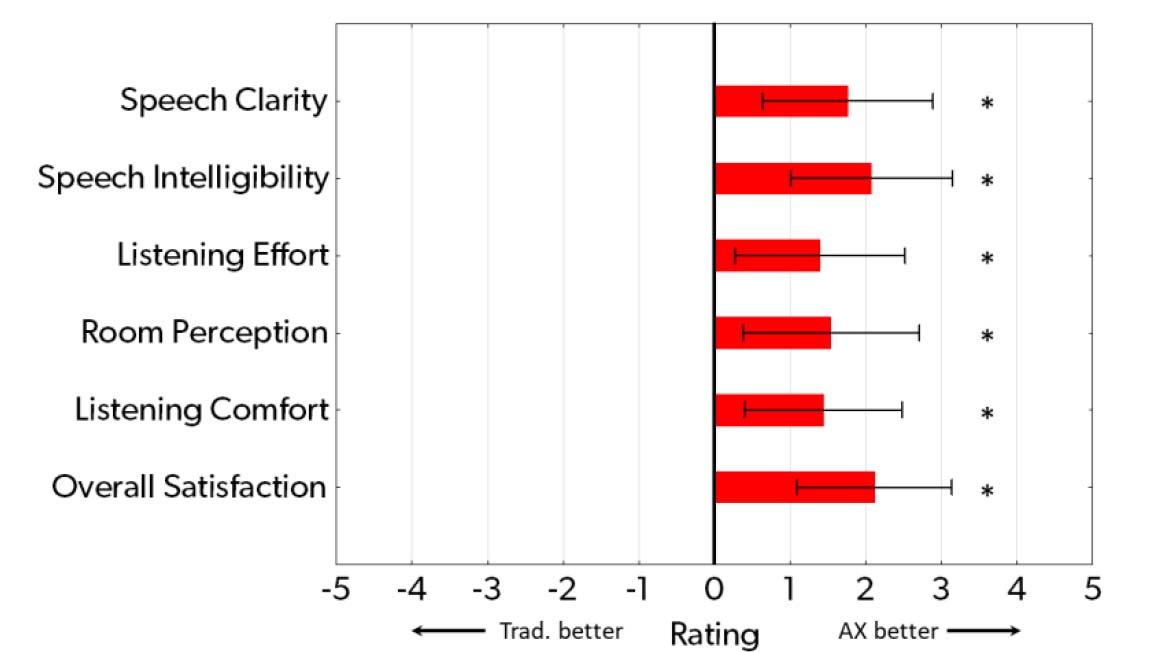 As the name indicates, the Auto EchoShield feature builds on some of the same principles that are already applied in the dedicated EchoShield program. However, as opposed to the manually selected program which only includes one setting of the processing, Auto EchoShield automatically scans the environments and kicks in when needed, and it adjusts its processing to the detected amount of reverberation in the room where the wearer is present. Thus, Auto EchoShield constantly optimizes the processing to the acoustic surroundings, no matter whether this includes low or high amounts of reverberation.

Auto EchoShield will automatically be part of the Universal Program after First Fit for performance level 7AX. You can see whether the feature is active or not in the Fine Tuning section in Connexx under Sound Settings (Figure 6). It is not recommended to deactivate the feature.

If it is desired, you can still set up a dedicated Reverberant Room program in the Program Handling section of Connexx.

In case you would like to offer Auto EchoShield to a client who already wears Signia AX hearing aids, connect the devices to Connexx and update firmware if a firmware update is offered. Once the firmware is updated, Auto EchoShield will automatically be active in the Universal Program. In case the wearer already had a Reverberant Room program and would like to keep using it, delete and create again to incorporate update. 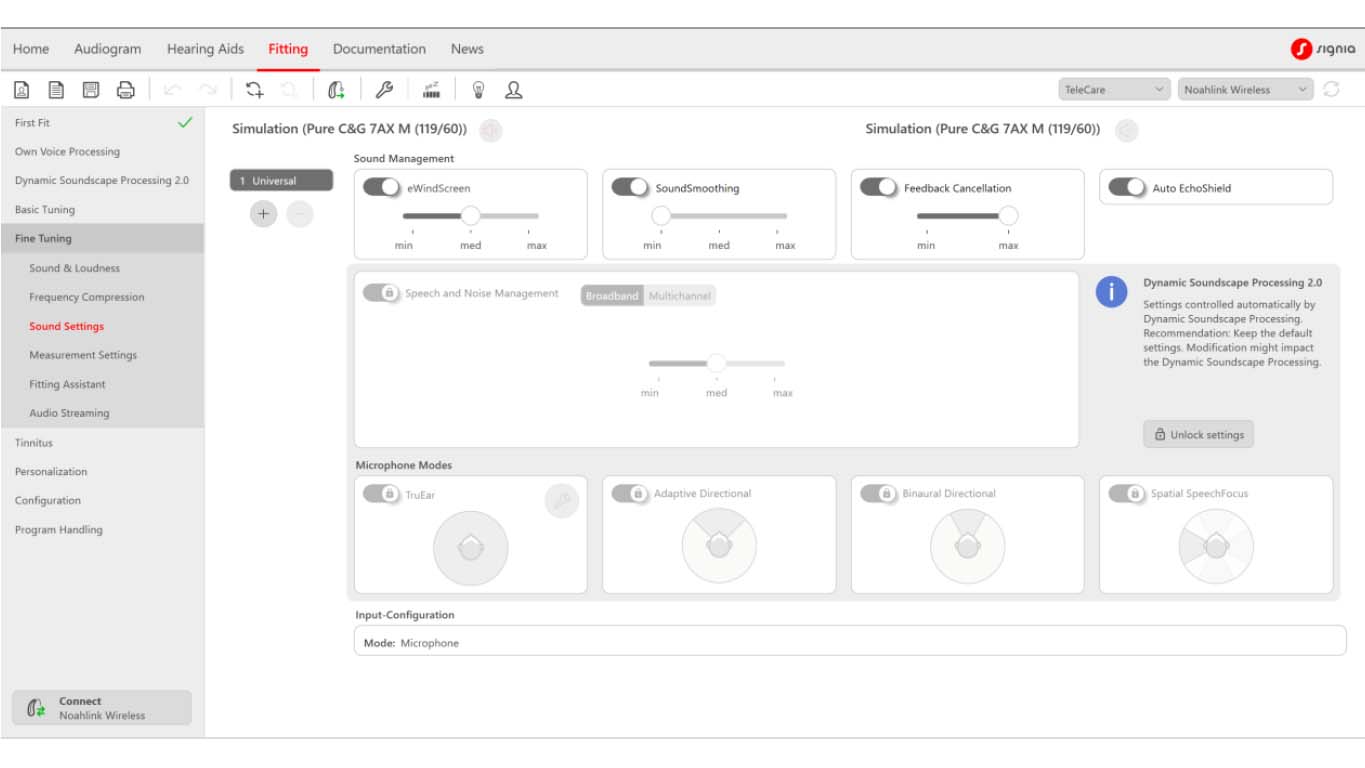